We would like to begin by acknowledging that the land on which we gather is the traditional territory of the Haudenosaunee, and most recently, the territory of the Mississaugas of the New Credit First Nation. The territory was the subject of the Dish With One Spoon Wampum Belt Covenant, an agreement between the Iroquois Confederacy and the Ojibwe and allied nations to peaceably share and care for the resources around the Great Lakes.

This territory is also covered by the Upper Canada Treaties.

Today, the meeting place of Toronto (from the Haudenosaunee word Tkaronto) is still the home to many Indigenous people from across Turtle Island and we are grateful to have the opportunity to work in the community, on this territory.

The exhibition included a digital, interactive narrative by Dr. Allison Crawford, called “Shot Through With Light”: 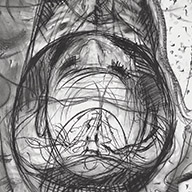 Lia Pas is an interdisciplinary performer-creator who makes work as text, sound, movement, and image. Her most recent solo work is ossa ora, a performance piece about teeth. Her interdisciplinary videopoem about the heart – susurrations – can be found on vimeo. Lia lives in Saskatoon and posts on liapas.com.

I am a Toronto-based artist interested in how emotional connections are formed and exploring what that means in my work. I discovered the powerful connections to that theme when looking at dissections and specimens in the anatomy lab in a class I took at OCAD University in 2013. What has arisen is a body of work requiring extensive research about how I understand my own body as a metaphor for what happens outside it.

I am a woman artist, dreamer, mother of a toddling son, a graduate student, a painter, a listener, a hopeful and devoted lover of stories, storytelling and story-sharing. I am an immigrant settler in Canada born in Israel on Palestinian land. I am twice a settler, of parents who themselves are twice immigrants and children of Holocaust survivors, who themselves migrated for their safety. I am drawn passionately to the healing spaces that stories and narratives create where otherness becomes indifferent to the moment of exchange between entities.

Jane Martin is an artist who lives and works in Toronto.  Her work may be found in collections that include the Art Gallery of Ontario, and the National Gallery.  The pieces in The Body Electric are part of a series, Something Happened, originally published in the journal Ars Medica. 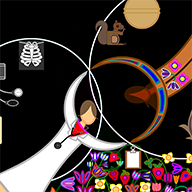 Lisa Boivin is an interdisciplinary Artist of Dene Ancestry. She is a Bioethics Specialist at University of Toronto. Lisa uses painting, photography, poetry and storytelling to bridge gaps between bioethics and aspects of Indigenous culture. She continues to bridge
the gap by including art in her course of study.

This work illustrates how a child’s perception of himself/herself can evolve through time. The stars and the bird represent childhood dreams: in the younger years, they seem achievable, however as we become older, barriers become more visible. If this transformation is a normal part of growing up, or if it is artificially induced by an adult figure – a parent, a teacher or a physician – is open to reflection.

Rose Adams (RCA) has been investigating memory and the brain in her art since 2004. She teaches at NSCAD University. Her 25-year retrospective, “BIRDS, BONES AND BRAINS” was held at Saint Mary’s University Art Gallery in 2014. She is represented by Secord Gallery in Halifax.

These images were produced at the Michener Institute for Applied Health Sciences in a learning activity to provide radiological technology students to develop a better understanding of X-ray attenuation and technical factors. This was a highly successful activity that the students enjoyed.

I grew up on the South Shore of Nova Scotia and spent my early twenties exploring the world before I decided to pursue medicine.

Lisa Carrie Goldberg is a multidisciplinary artist whose work often takes the form of full-sensory installations that examine the realm of art and science. In addition to her art practice, Lisa is the owner of Action Potential Lab, Toronto’s first laboratory dedicated to merging science and art programmings for kids to adults.

Dani Cadieux is a third year medical student in the Schulich School of Medicine & Dentistry, Western University (2016). Dani is a self-taught artist with a keen interest in blending her love of creative expression with reflections from the medical profession.

Susan Bidinosti is a graduate of the Ontario College of Art and Design. An artist and former surface print designer, Susan is currently working as a researcher in the area of arts and health at Western University. 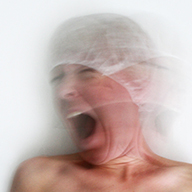 Dr. Kaisu Koski is a Finnish artist and researcher, based in the Netherlands. She graduated from the University of Lapland and the Amsterdam School of the Arts, receiving training in media and performance art. Kaisu’s art practice is intertwined with academic research, focusing on the dialogue between art and medicine. Her postdoctoral research project explored the representations of the body in medical education.

After obtaining a fellowship in emergency medicine from Queen’s in 2002, I began a second career as a filmmaker.  My films draw inspiration from the wide range of human experiences that I have been privileged to encounter as a physician. ‘161!’ is a visual poem about perception.

Ana Jofre’s interdisciplinary practice is grounded in a diverse academic background, which includes a PhD in Physics from the University of Toronto. Ana started pursuing art as a professional practice and exhibiting her work while serving as a full-time faculty member in the Department of Physics at UNC Charlotte, where she conducted and published research in Experimental Biophysics. She is currently a graduate student in fine arts at OCAD University. 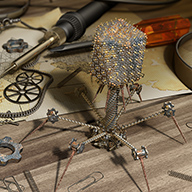 I took the “mechanical” nature of the bacteriophage as an inspiration and
constructed it in 3D, as if it were created on someones workbench out of bits of metal salvaged from other mechanical devices strewn around the bench. However, in order to maintain scientific accuracy, all parts of the bacteriophage (capsid along with major capsid proteins, baseplate, sheath etc.) are represented in accurate proportions, albeit out of metal etc.

Susan is a visual artist/sculptor, an educator and a qualified art therapist. She is an honours graduate of Emily Carr University of Art and Design and holds an MFA in Visual Arts from the University of Waterloo. Currently, Susan teaches within the Faculty of Animation, Arts and Design at Sheridan College, where she is also the Coordinator of Faculty Peer Coaching. 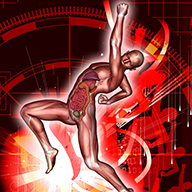 This illustration is an attempt to describe how the concept of the body, its secrets, and dynamics are seen through the new every time more and more pervasive and intrusive technological eye.

*Listed in the order of appearance in the exhibit.